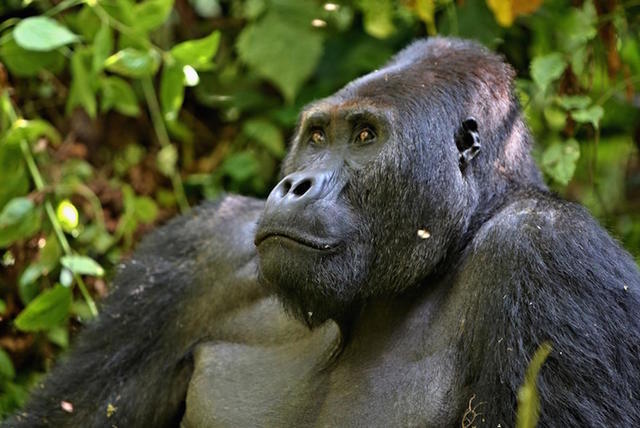 Gorillas are the largest extant genus of primates by size. They dwell in the grounds, predominantly herbivorous apes that live in the forest of central Africa. The genus is divided into two species and four to five subspecies. The DNA of gorillas is highly similar to that of a human from 95-99% depending on what is counted and they are the next closest living relatives we humans have after the bonobo and common chimpanzee.

Gargantua was a captive gorilla who was famous in his lifetime and has been credited with saving the Ringling Brothers circus from bankruptcy. An acid scar on his face gave Gargantua a snarling, menacing expression, and the circus management attracted attention to him by emphasizing, in their publicity, his alleged hatred of humans.

He was also claimed to be the largest gorilla in captivity. Sources say that Gargantua weighs variously around 550 to 600 lb. The seven years old Gargantua was described as 460lb when first displayed. His standing height was recorded to be 1.68 meters of 5ft 6 inches tall. Lowland Gorillas usually reach 440 lb in the wild.

Gargantua was captured as a baby in Africa and was known as “Buddy” for years. After he was sold to Ringling Brothers by his previous owner, Gertrude Lintz, he was renamed after the literary character Gargantua for his large size (the literary Gargantua was a giant) and because the name sounded more frightening.

He had a “mate” named Toto, but apparently never showed any interest in her. She was nevertheless advertised by the circus as “Mrs. Gargantua”.

Gargantua was born in the wild in the Belgian Congo in the approximately year 1929. In the early 1930s, the gorilla was given as a gift to a man named Captain Arthur Philips as a gift from his missionaries in Africa. The captain became fond of him and began calling him ‘Buddy’. He was kept aboard and became popular amongst the crew.

One sailor, unfortunately, drunk and seeking revenge on the captain’s strictness, threw nitric acid in Buddy’s poor face. Fortunately, that didn’t kill the gorilla but that almost blinded him and left both mental and physical scars leaving him more aggressive.

Unable to stand his aggression, the captain decided to give Buddy to a man named Gertude Lintz, a wealthy eccentric who looked after sick animals in Brooklyn. Her husband, Dr. Bill Lints, diagnosed Buddy with double pneumonia. Mrs. Lintz treated the poor gorilla back to a healthier shape including chewing foods for him and along with her kennel-man, Richard Dick Kroener, trained and raised Buddy. She truly cared for Buddy, even dressed him up and seats him on the passenger’s seat. But an unfortunate event happened in 1937 when Buddy got accidentally frightened by thunder, broke out of his cage, and climbed into bed with his mother for comfort. Buddy was then about 460lb.

Buddy also became a very famous circus attraction when Ringling bought him from Mr. Lintz for less than $10, 000 and change his name into what we now know as “Gargantua” at his wife’s suggestion. The Ringling Brothers and Barnum and Bailey Circus were, during that time, experiencing financial problems after the Great Depression.

No matter how untrue these claims and slogans are, Gargantua has successfully attracted millions and single-handedly saved the circus.

After gaining so much fame, a special cage was built just for him by the Crane Company. It was air-tight and air-conditioned, designed to keep Gargantua in and the spectators’ diseases out.

Gargantua died in November 1949 of double pneumonia. A necropsy performed at Johns Hopkins Hospital revealed that Gargantua had been suffering from several conditions at the time of his death, including skin disease and four impacted and rotten wisdom teeth.

His skeleton was then donated to the Peabody Museum in 1950 but is now only displayed on special occasions.