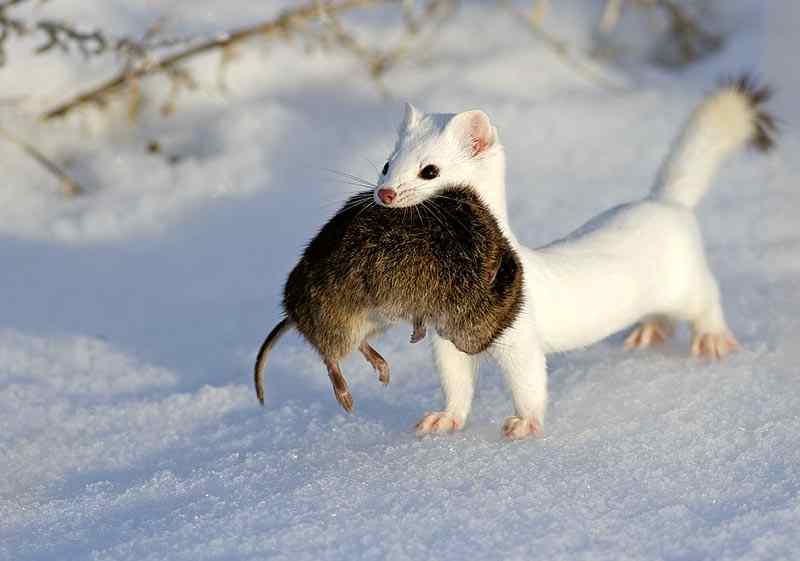 The animal kingdom maintains a perfect balance of prey and predators. This healthy ecology is brought about to the fact that animals eat what is needed to be eaten and not those that they do not need. This balance is thrown off-key most of the time because of human intervention hence the ecology or the food chain is destroyed. In the animal kingdom, this ecology is maintained through predators that are carnivorous. They eat other animals in order to sustain themselves.

When we think of carnivorous animals, we often think of large ferocious beasts that roam the Earth and devour smaller animals. Rarely can we find a small animal that is able to take down a larger animal in order to eat them. Find out which is the smallest carnivore in the world.

The smallest carnivore in the world is the least weasel.

The least weasel is small creatures that live in the northeast region in Asia. They have an average body length of 130-260mm for males and 114-204mm for females.

They primarily live in European Asia, North America, and North Africa but has been known to be introduced in several other parts of the world but not as prominent as these regions.

The least weasel is known to be a fierce hunter considering its small stature but it can take down animals that are 5 to 10 times its own weight. Least weasels are known to kill rabbits.

The least weasel usually likes to live in stone walls, hedges, and the woods and try to avoid open spaces where they fall victim to eagles and other larger animals that prey on them. They live in cooler regions hence northeast Asia and northern areas of North America. The least weasel has a dirty brown coat that helps them hide from predators and make great camouflage when they are on the hunt. A least weasel’s diet consists of mice, rats, moles, birds, eggs, rabbits, and sometimes poultry. They have sharp claws and teeth that help them grab and catch their prey.

Least weasel benefits greatly with the current ecology as they prey on rodents that destroy crops. But, they are also highly contested prey for owls and eagles. Although they are widespread across the globe, they are slowly becoming under threat from deforestation and illegal logging. This shortens the lifespan of the least weasel hence they are not able to populate well.

The least weasel becomes sexually mature at 3-4 months but with the rapid expansion of human territories over their lands, the least weasel cannot properly breed.

As they are driven outside their homes, they are forced to live in open areas where they fall victim to their natural predator. This throws the food chain off balance as the demand is steady but the supply of food is low.

What makes the least weasel very interesting is that they are able to kill off an animal that is five times their size. A feat that can only come from the smallest carnivore in the world.