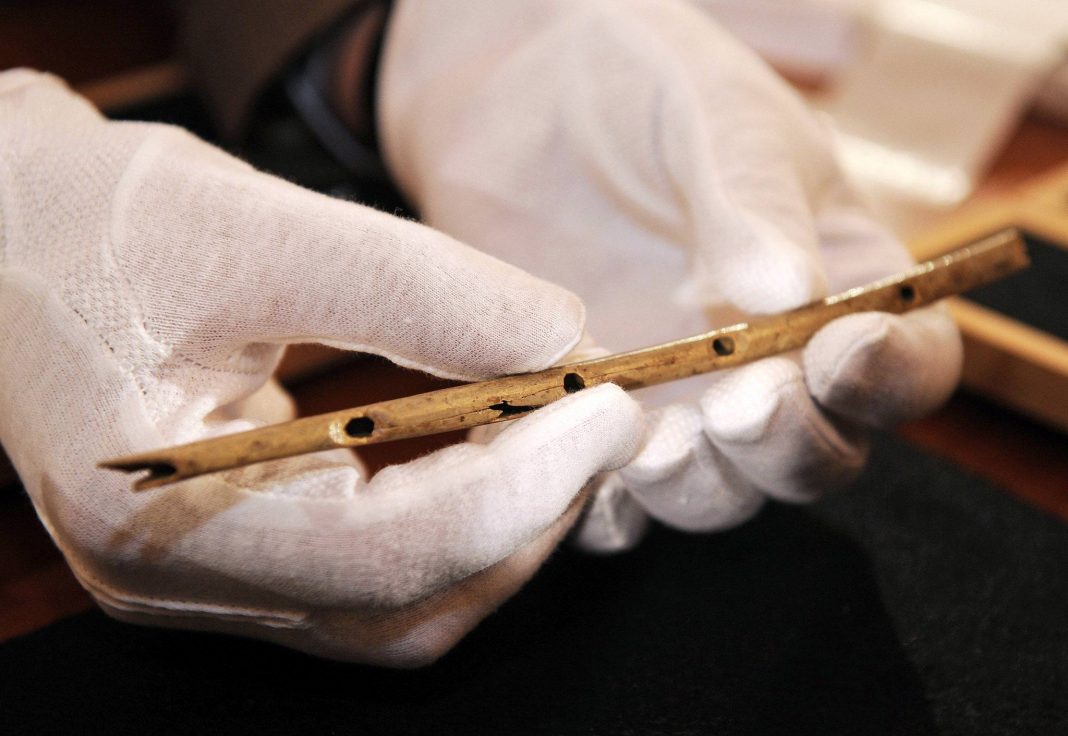 Music has been a part of our society probably even back during the prehistoric days. Music isn’t just a simple sound because it follows a certain beat and rhythm. Clapping one’s hands is considered to be a simple sound but clapping in a specific order or beat will then classify it as music even if it was a bit out of tune. Musical instruments are the items used in creating such wonderful tunes and pieces of art. There are many kinds of them ranging from wind, percussion, string, and many more. They have different origins and are made from different materials depending on what they’re classified as. It is an interesting thing to note that even the earliest people have gained some pleasure from music as the development of these instruments dates back a long time ago.

The oldest instrument to be discovered is called the Paleolithic Flute.

The Paleolithic flute is also called the bone flute as it is made from animal bones. The design is very much dependant on the bone of the animal used. The holes are then applied to the bone as it mimics the actual appearance and purpose of the flute.

Taking into consideration there are two end holes where the flute is blown at and the other is where the musical tune exits from.

The earliest Paleolithic flutes were discovered in European countries like the Netherlands but more specifically in Germany. Several bone-like items were discovered in some of the caves and they turned out to be some sort of an excavation tool. It turns out these tools looked more like flutes and after extensive testing and research it was concluded that they were.

The discoveries were made right around the late 1980’s and the early 1990’s with these Paleolithic flutes dating to be as old as 30,000 to 35,000 years old. It probably doesn’t reach the age of the prehistoric era but it does record to be around the caveman days. In 2012 it was declared that the Hohle Fels was the oldest Paleolithic flute to date as it was aged around 35,000 years old.

The most common type of Paleolithic flute is made from vulture bones. The other discovered flutes were classified as derived from elephant or probably mammoth bones. They weren’t as big though but some were made from ivory which can be obtained through the tusks of the said creatures. There are also other variations from post prehistoric eras like a bear femur or from a lion for some reason.

Experts believed that these Paleolithic flutes were also used for other purposes. The first one would be the music of course but considering that early people may not be aware of its properties for self-entertainment.

They probably used the music generated to allure wild animals as the saying goes “Music soothes the savage beast”. These flutes were also believed to be used as weapons considering the sturdiness of the said items.

Instruments have indeed gone a long way from the regular bone materials to today’s high-tech innovations. It’s still arguable whether the first creators of these instruments were aware of the musical properties or they just made it for no apparent reason.