The Smallest and Lightest Named Bone in the Human Body 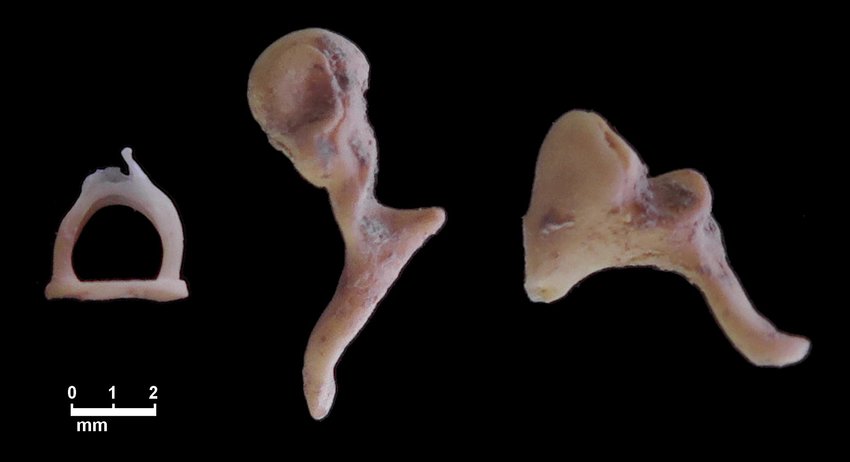 A bone is a rigid organ that constitutes part of the vertebral skeleton. Bones provide a framework for the attachment of muscles and other tissues that give shape to the body. They also serve as mechanical protection of the delicate internal organs such as the brain and the heart from injury.

The human body is composed of around 300 bones, in a variety of shapes and sizes.

The bones of the ear, also known as the auditory ossicles, are composed of several bones. These bones play an important role in the sense of hearing by transmitting sounds to the inner ear. Most of the bones found in the auditory ossicles are said to be small and light.

The smallest and lightest bone in the human body is the stapes. This bone measures roughly 3 x 2.5 millimetres, which is greater along the head base span. The stape is a stirrup-shaped bone that is connected by an annular ligament to the oval window of the middle ear. It transmits sound vibrations from the incus to the oval window, a membrane-covered opening, adjacent to the ear.

Stapes usually develop from the second pharyngeal arch during the sixth to the eighth week of one’s embryological life.

It is usually stabilized by the stapedius muscle which is supplied by the facial nerve.

At times abnormalities occur in the ear affecting the stapes. This abnormality is characterized by bone remodelling in the inner ear. This causes the stapes to adhere to the oval window causing conductive hearing loss. This abnormality is referred to as otosclerosis. This phenomenon is more likely to occur in females and young age groups. Possible treatments and remedies may include stapedectomy and stapedotomy.

Stapedectomy refers to the surgical removal of the stapes and replacing it with an artificial prosthesis.

Stapedotomy refers to the creation of a small hole in the base of the stapes which is then followed by the insertion of an artificial prosthesis into the hole created. These procedures may be complicated thus causing damage or obliteration in the base of the bone.

The discovery of stapes is somehow full of controversies. In 1546, this smallest bone was discovered and accounted to Professor Giovanni Filippo Ingrassia at the University of Naples. However, controversies with this discovery arise when his description of stapes was published posthumously in his anatomical commentary In Galeni librum de ossibus doctissima et expectatissima commentaria in 1603.

Prior to this publication, a Spanish anatomist, Pedro Jimeno, is first to have been credited with a published description entitled Dialogus de re medica in 1549.

The bones in the human body are truly a complex organ that is made up of many cells, fibers, and minerals. These skeletal system works together with the other biological systems of the body to ensure the optimum performance in order to make complete a functional organism like humans. It is, therefore, necessary to take care of these systems for a better and healthier body.